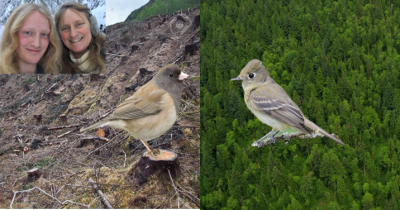 Retention forestry aims to maintain biodiversity within managed stands. We followed breeding birds over 25 years after harvest within stands with 0% (clearcut), 40%, 70% and 100% (unharvested control) retention. Response varied with habitat preference. Conifer-forest species declined after harvest. Open-habitat and generalist species increased in clearcuts and 40% retention stands. Mixed-forest species reached their highest abundance at 40% retention. Although conifer-forest, open-habitat and generalist species treated retention stands as intermediate between clearcuts and controls, mixed-forest species perceived them as a different, preferred habitat for the first decade. We conclude that most forest birds equate 70% retention stands with unharvested forest, that 40% retention can reduce impacts for conifer-forest birds and provide new habitat for mixed-forest and open-habitat species, and that bird communities are still changing after 24 years.

Karen Price (PhD) is a consultant based in Smithers who works at the interface of science and management. She discovered a passion for ecology early (starting skull and lichen collections at age 5) and had the good luck to study behavioural ecology in grad school, spending her summers watching squirrel mothers bequeath their territories to their young and yellow-headed blackbirds feed their manipulative offspring. She then ran away to a little log cabin on Francois Lake with her partner Dave Daust where she proceeded to ignore everything she’d learned about parent-offspring conflict and reproduce. She enjoys synthesising data, working to increase the knowledge used in decision-making, and more generally, learning about the natural world. Her recent work has focussed on assessing the risk to biodiversity posed by cumulative effects of management and climate change, and figuring out how to integrate climate change and resilience into resource decisions. For a treat, she sometimes plays with real data. For a bigger treat, she plays with data with her son, Kiri. Maybe reproducing was worth it.

Retention forestry aims to maintain structural and functional continuity in managed stands. While short-term benefits to forest dwellers are well documented, few studies have followed patterns over decades to assess whether benefits continue. Initiated in 1992, the Date Creek Research Forest in northwest BC includes four replicates of four retention levels: 0% (clearcut), 40%, 70% and 100% (unharvested control). These stands, with retention designed to mimic typical insect and wind disturbance, are now entering the canopy closure seral stage. We followed breeding bird community dynamics over 25 years (pre-harvest and 24 years post-harvest). Given relatively consistent landscape conditions over time, we focused on stand-level changes in bird community composition and species abundance. Community similarity to controls decreased as retention decreased; communities changed over time, with those in clearcuts changing most. Patterns in species abundance varied with habitat preference. Conifer-forest species declined immediately after harvest, with some responding linearly to retention level while others responded similarly to 40%, 70% and 100% treatments; Pacific Slope Flycatcher, Pacific Wren and Brown Creeper remained significantly less abundant in some treatments by year 24. Open-habitat and generalist species increased most in clearcut and somewhat in 40% retention stands, with generalists taking advantage of the increased heterogeneity immediately and open-habitat species colonizing by year 10; some of these species, particularly shrub specialists, remained at high abundance in harvested stands in year 24. Mixed-forest species reached their highest abundance at 40% retention in year 2 and 10, and dropped to control levels by year 24. Although conifer-forest, open-habitat and generalist species treated retention stands as intermediate between clearcuts and controls, mixed-forest species perceived them as a different, preferred habitat for the first decade. We conclude first that most forest birds do not discriminate between 70% retention stands and unharvested forest, confirming strategies in the region to maintain biodiversity in landscape corridors, second that aggregated 40% patch retention partially or fully mitigates impacts for conifer-forest birds, and provides new habitat for mixed-forest and open-habitat species, and third that bird communities are still changing after 24 years as these stands enter canopy closure.

Forest management in BC leaves considerably less retention than the experimental treatments. Legal objectives for similar ecosystems include maintenance of “the range of structural attributes of old forest ecosystems within forest stands”, but only require 1 – 6% retention. Our study suggests that these levels of retention will not maintain the “structural attributes of old forest” as perceived by forest birds, and will not maintain mature-forest bird communities within harvested stands, at least for 25 years. Birds depending on mature coniferous forest will rely on areas reserved from harvest rather than the managed landbase.

Retention mitigates impacts to birds that prefer mature coniferous forest and creates habitat for other bird species. Very high retention levels (70% in this study) were perceived as similar to unharvested forest by most birds. Our study confirms that a light harvesting touch, policy in landscape corridors in the Bulkley, will likely maintain bird communities. Aggregated patch retention at high levels (40% in this study) partly or fully mitigates harvest impacts for conifer-forest birds and increases heterogeneity, providing new habitat for mixed-forest and open-habitat species. In these forests, 40% retention appears a reasonable strategy both to grow trees and maintain bird communities.