Fire legacies in a BC coastal temperate rainforest 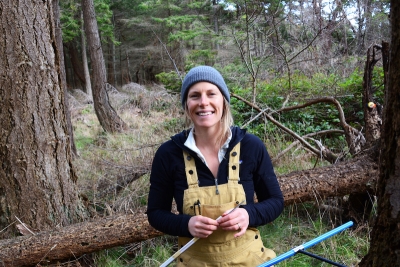 While wildfire is globally most common in the savanna-grassland ecotone, the flammability of coastal temperate rainforests is considered low and little is known regarding historic fire activity. Reconstructing historical fire activity typically requires dendrochronological records from fire-scarred trees and post-fire cohorts, but this type of information is rare in perhumid temperate rainforests, which are dominated by dense fuels with high year-round moisture content. I reconstructed historic fire activity using fire scars, tree rings, soil charcoal, and remote sensing techniques in a 2000 km2 island group located within the Hakai Lúxvbálís Conservancy on the coastal margin of central British Columbia. I broadly assessed 13,000 years of fire activity with charcoal deposited in soils, and reconstructed late Holocene fire events with a 700-year chronology built from living fire-scarred trees and stand establishment data. I used a weight of evidence approach to hypothesize the origins of fires and whether First Nations intentionally utilized fire for resource management. Low-severity fires occurred most frequently in forests surrounding former First Nations habitation sites, and lightning strikes do not occur often enough to explain the observed temporal or spatial patterns of fire activity in the study area. Low-severity fires occurred approximately every 39 years, and were 25 times more likely to occur than previously estimated. Fires influenced the composition and structure of vegetation by creating a mosaic of vegetation types in different stages of succession, and thus increased the abundance of culturally important food plants. Fire events have not occurred in the study area since 1893, which also coincides with the reduction of First Nations activities in their traditional territories. My data are consistent with the hypothesis that humans intentionally used fire to manage resources, though further research and ethnographic data collected elsewhere in the region is required to corroborate these findings. Ecological legacies of historic fires remain visible on the present day landscape, and by reconstructing the historic range of fire cycle variability we gain a better understanding of human-driven fire activity and the abrupt changes that occurred in the 20th century.

Dr. Kira Hoffman is an ecologist, conservationist and former wildland firefighter who was born and raised in Smithers. Hoffman's research focuses on how humans have used fire for millennia to manage and enhance their natural surroundings. Combined with traditional ecological knowledge, she uses science to understand how present-day forests have been shaped by indigenous management techniques such as burning, fertilizing and transplanting. From field expeditions to historical photograph interpretation and contemporary satellite imagery, her methods also integrate a range of disciplines including botany, archaeology and cultural anthropology, providing new perspectives on how indigenous ways of knowing can complement scientific findings. She’s passionate about how people perceive landscapes, learn about their surrounding environments and connect to place. Kira recently moved back to Smithers and spends as much time as possible in the outdoors. She currently works an ecologist and affiliate Researcher with the Bamfield Marine Sciences Centre. Follow her @kiramhoffman on Twitter or visit http://www.kirahoffman.com.

For millennia, First Nations have tended their land with fire. Hoffman’s research raises important questions about fire prevention strategies in BC, which have often been counter to traditional and scientific views that recognize fire as an integral component of healthy forests. As our climate changes and wildfires become more destructive, Hoffman’s work can help inform forest management and integrate traditional knowledge into our current understanding of fire in the north, leading to healthier forests and more fire safe communities.