Geoscience BC: A special seminar 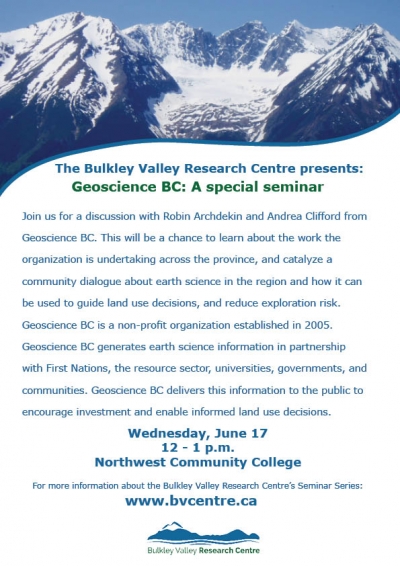 Join us for a discussion with Robin Archdekin and Andrea Clifford from Geoscience BC. This will be a chance to learn about the work the organization is undertaking across the province, and catalyze a community dialogue about earth science in the region and how it can be used to guide informed land use decisions, and reduce exploration risk.

Geoscience BC generates and publicly delivers earth science information throughout BC, and does this as a non-profit entity. Established in 2005, the mandate of the organization is to build the BC economy, whether it be by attracting investment or by enabling responsible resource development through collaborations with First Nations, the resource sector, universities, local communities, and governments.

Since 2007, Geoscience BC has conducted regional projects throughout the BC interior and Vancouver Island, collecting regional geoscience information including geophysics, geochemistry and detailed geological research. This type of information is valuable in reducing exploration risk and can guiding informed land use decisions.

Geoscience BC is celebrating its 10th anniversary this year and the BC Government has just announced a 5 million dollar investment in the organization. Learn more about Geoscience BC here.