The Old Church - on the corner of First Avenue and King St. - Smithers, BC 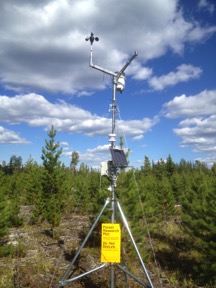 Precipitation that falls as snow has important social, economic and ecological implications in cool temperate and subarctic regions. The amount of water that held within the snowpack is of particular interest to water managers because the melt of which replenishes water storage infrastructure, groundwater and dictates the amount of water available for irrigation, municipal use, power generation and ecological needs (Dunne & Leopold, 1998).  Snowmelt in the Kiskatinaw River is associated with peak runoff, maximum soil moisture levels, and seasonal wetland recharge.

Over the last several decades higher variability in snow accumulation and onset of the spring runoff occurring 9 days earlier than the long-term average has been observed (Forest Practices Board 2011). The City of Dawson Creek, UNBC, BC Ministry of Forests, Lands and Natural Resources Operations (FLNRO) and the Ministry of Environment are cooperating to advance long-term watershed viability for the City of Dawson Creek.

In October of 2011 FLNRO began a snow monitoring study to support hydrologic research in the Kiskatinaw watershed, including a climate network relaying data in real time. Hunter Gleason's research aims to utilize the existing monitoring data to develop a numerical snowmelt runoff model that will provide spring runoff predictions of water turbidity levels, volume and timing for the Kiskatinaw River in addition to investigating the effects that variations in climate are having on snow accumulation and runoff in the Kiskatinaw River.

Growing up in the arid southwest region of Colorado provided Hunter with an early appreciation of the dynamic role that water plays in society. In 2010, Hunter enrolled in the Watershed Science program at Colorado State University (CSU). During his undergraduate degree, he undertook fieldwork, most notably working with the Mountain Studies Institute in Silverton, CO, helping with riparian surveys and developing repeat photography sites. When Hunter learned about the Kiskatinaw forecasting opportunity at UNBC he jumped at the chance. Hunter has a particular interest in the snow oriented nature of the project, and its relevance to water resource decision making.