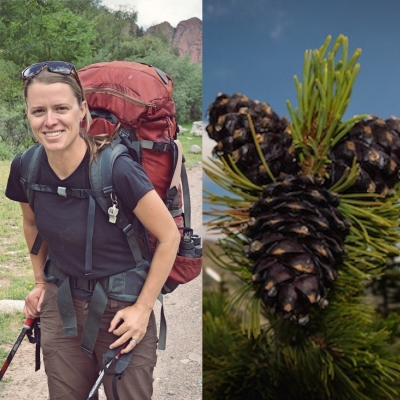 Climate change is anticipated to generally result in a poleward or upward elevational movement of species due to warming temperatures. The underlying assumption of this prediction is that climate, particularly cold climates, are the most important driver of species range limits at latitudinal or elevational edges. However, evidence is mixed that species are following these predictions. This research focuses on the northern distribution of an endangered mountain tree species, whitebark pine, and suggests that that both abiotic (climate/landscape) and biotic (species interactions) factors are contributing to its northern distributional edge. This presentation emphasizes the importance of these different drivers of species ranges, and suggests that understanding species within the context of climate, landscape, and networks of biotic interactions will be important for predicting species response to climate change.

Understanding the role of climate in shaping species ranges will be critical in forecasting range shifts with changing climate. The factors influencing the niche and distribution of species include climate at a broad scale; topography, land-use, dispersal and many other biotic and abiotic interactions will further constrain species distributions within a spatially-hierarchical ecological system. Whitebark pine (Pinus albicaulis) is an endangered high elevation tree species of western North America. Anticipated climate change effects predict the migration of whitebark pine to suitable habitat north of its current range limits. However, the cause of the current northern range limit in north-central British Columbia is previously unresolved, so it is unclear whether there will be northward migration with changing climate. I used a hierarchically-structured statistical model across regional (climate) and local (climate and topography) scales and found that occurrence and abundance of whitebark pine is best predicted by cold temperatures and associated low growing degree-days. This analysis also indicates ample suitable climatic habitat north of the current distributional limit of whitebark pine. By including seed dispersal via Clark’s nutcracker (Nucifraga columbiana), I showed that the northern range is likely directly limited by low seed dispersal and by an indirect interaction with Douglas-fir (Pseudotsuga menziesii), the dominant alternative food source for Clark’s nutcracker. I applied future potential scenarios of climate change, mortality and active restoration to evaluate the consequences on whitebark pine species distribution, and my results indicate that a range contraction to core habitat areas further south appears to be a potential outcome of climate change and ongoing mortality. The northern-most populations were the most vulnerable, but most responsive to restoration (seedling planting) and Douglas-fir management scenarios. Overall, my research provides a better understanding of how abiotic and biotic processes interact to shape species distributions across scales. Ultimately, these findings can inform conservation planning for whitebark pine, a highly endangered and ecologically valuable tree species.

Alana Clason is an ecologist based in Smithers, BC. She is a recent graduate of UNBC, where she worked to understand whitebark pine’s northern distributional range limit and forecast future range shifts under climate change. She has worked extensively in mountain ecosystems on birds, plants and animals, but has invested most of her research to date studying endangered whitebark pine. She is currently a post-doctoral research associate with the Bulkley Valley Research Centre, supported by the Ministry of Forest, Lands, Natural Resource Operations and Rural Development. Her research focuses on modeling forest stand dynamics (using SORTIE-ND) to support ecological research, as well as conservation and management of timber and non-timber resources. She continues her obsession with whitebark pine through ongoing research, restoration and outreach projects with the BVRC whitebark pine program and her role as a board member with the Whitebark Pine Ecosystem Foundation. Originally from Ottawa, Alana fell in love with the west and put her roots down in beautiful Smithers 9 years ago.

This research studies a species-at-risk whose northern limit occurs in the NW BC. Understanding why, and predicting how the future distribution may change for northern populations is essential for managing this species under a changing climate.