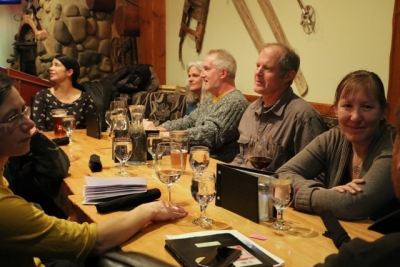 The Bulkley Valley Research Centre (BVRC) celebrated another year of innovative, credible research at their annual general meeting on Tuesday, February 27th. Over 30 members of the BVRC community gathered at the Aspen Riverhouse Lounge for an evening of reflection and information sharing. Board President, Adrian de Groot, spoke of the plethora of ongoing research projects and programs that operate through the Centre, from the popular fall/spring Seminar Series and ML/ARD field course, to new initiatives that are underway following the recent appointment of Executive Director, Leigh-Ann Fenwick. "We look forward to seeing how it will evolve, where Leigh-Ann can take us, and how the Centre will look next year at this time," said de Groot.

BVRC Treasurer, Brian Edmison, presented an overview of the 2017 financial statements, including a detailed description of the recent audit. Edmison summarized and clarified the position of specific funds and trusts, as well as providing context for the Centre's 16-year financial history and trending decline in surplus funds. Reflecting on his many years of involvement with the BVRC, Edmison spoke about what the society has to offer to both researchers and funders: "We offer structure, accountability, transparency, and special knowledge of this region without bias, since we're not self-serving. We have a track record of what we've done for 16 years and have earned a lot respect for that. I think there's a need for us and I look forward to working with everyone here to meet the challenges as they come."

The 2018 Jim Pojar Publication of the Year Award was presented to the co-authors of Kwӓday Dӓn Ts’inchį: Teachings from Long Ago Person Found. The award winners include the editorial team Richard J. Hebda, Sheila Greer, and Alexander P. Mackie. Over 17 years in the making, this publication represents a transdisciplinary fusion of western science and traditional knowledge that perhaps marks a turning point in the way that science is conducted in the 21st century. The 2018 Irving Fox Award was presented to the Kitimat Valley Naturalists (KVN), who played an essential role in gathering scientific and natural history information about the river and estuary since the 1970s. In addition, the KVN has undertaken a variety of projects to conserve and restore the ecological health of the Kitimat estuary and river valley. Congratulations to our 2018 award winners.

A special thank you was extended to outgoing board members Alan Baxter and Daryl Hanson for their exemplary service to the BVRC and its membership. The Centre also welcomed two new board members at this year's AGM: Adriana Almeida-Rodriguez, a biologist with the Ministry of Environment and Climate Change Strategy, and Brian Kolman, who works in natural resource management with FLNRO&RD. The BVRC looks forward to benefitting from their ideas and expertise as the society both redefines and reconfirms its purpose in the year ahead.