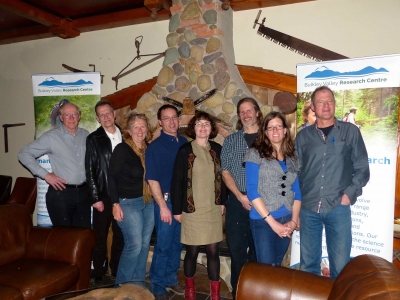 On Thursday, March 19, the Bulkley Valley Research Centre (BVRC) welcomed close to 40 people to its annual general meeting at the Aspen Riverhouse, where members heard that diversity of funding, an expanded research program, and a wide network of collaborative relationships shows that the organization has the flexibility to respond to the region’s evolving research needs.

One of the centre’s strategic goals has been to create a diverse funding base. Today, the BVRC has 56 projects and 18 funding sources, from foundations and trusts, to government and large corporations. In the context of growing interest in natural resource exploration in northern B.C., the objective to diversify has become increasingly relevant.

Morgan also emphasized the importance of building and strengthening relationships with First Nations groups, as their role in environmental stewardship grows in northern B.C.

Rick Budhwa, the BVRC’s executive director, believes that bringing structure to change will be an ongoing theme for the organization. In the past year, the BVRC increased support personnel and better defined roles and policies. Budhwa says, “The centre has become stronger, without forsaking our ability to be flexible and adapt. This is appealing to the outside agencies we’re working with and has also been well received from within the centre, by researchers, staff and members.”

Another change to the organization is the departure of Kirsteen Laing, who has been the administrative manager at the centre since 2004. In recognition of her valuable contribution, Laing was presented with the BVRC’s first-ever Exemplary Service Award.