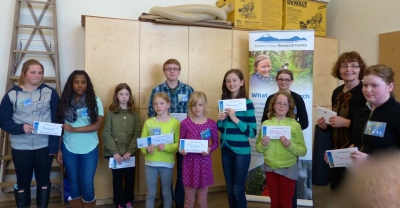 On Saturday April 18th, twelve students were presented with the Bulkley Valley Research Centre’s Special Effort Award at the 2015 Pacific Northwest Regional Science Fair Awards Ceremony, which was held at the Northwest Community College in Smithers.

Representatives from each participating school chose one student who was observed putting the most energy and interest into their project, regardless of whether the project received any other recognition or awards.

Sybille Haeussler, a founding board member and past president of the Bulkley Valley Research Centre (BVRC), presented the awards on behalf of the organization. “It was a pleasure and an honour to present these awards, and in particular to encourage these students in their extra efforts, which is what this award is all about,” says Haeussler.

Emma Larson, a grade seven student from Twain Sullivan Elementary School in Houston, was among the winners this year for her project on vision and eye colour. Twain Sullivan Elementary School teacher, Lauren Rutley, believes the BVRC award is both unique and important. “This is a great award because it recognizes the value of hard work. The fact that the teachers judge this award is unique, it allowed me to ensure recognition was given to Emma, who stood out to me because of the exceptional independent effort she put into her project,” says Rutley.

The BVRC also supports local students, undertaking studies in the field of science, through its scholarship program. The BVRC is now calling for scholarship applications for the BVRC Irving Fox Memorial Scholarship for Natural Resources Research and Management. Applications must be received by May 31st 2015. For eligibility, and application information, students can visit: http://bvcentre.ca/get-involved/scholarship