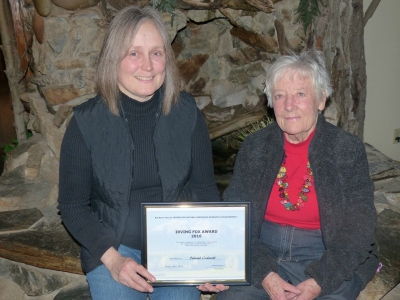 On Monday, March 14, the Bulkley Valley Research Centre (BVRC) welcomed 30 people to its annual general meeting at the Aspen Riverhouse. It was an eventful evening with the BVRC commemorating the 10-year anniversary of two of its major research awards: The Irving Fox Award and the Jim Pojar Award.

Sybille Haeussler, former Board Member says: “Here at the research centre we are extremely proud that we have been presenting these awards for ten years. There is a tremendous amount of work going on in the region and these awards provide a chance to showcase and celebrate this.”

At the AGM three BVRC awards were announced for 2016. Deborah Cichowski, a caribou biologist from Smithers, received the 2016 Irving Fox Lifetime Achievement Award for her outstanding 25-year contribution to the scientific knowledge and conservation of the Tweedsmuir-Entiako caribou herd, and more broadly for her dedication to conservation of endangered woodland caribou in Canada.   Dr. Leslie Main Johnson was awarded the 2016 Jim Pojar Publication of the Year Award for her publication “Trail of Story, Traveller’s Path: Reflections on Ethnoecology and Landscape.” Robert Westcott was awarded the BVRC’s Volunteer Distinction Award for so generously sharing his knowledge and experience with the BVRC on a wide range of operations and projects throughout 2015.

At the AGM members heard that the BVRC is in a strong and stable position both financially and from a research direction standpoint, due to the centre’s ability to innovate and adapt. BVRC Vice President Don Morgan told members: “In the past few years we have been able to find creative and innovative ways to navigate our position as an organization with partnerships with corporations, while staying true to our purpose as a charitable entity, providing high quality monitoring and research in the public interest.”

The gathering also heard that providing networking and mentorship opportunities for the local research community is becoming an increasingly important role for the BVRC. “This year there has been a real effort to connect the well-established, experienced local researchers with the young people coming along,” says BVRC Executive Director, Rick Budhwa.

A special thanks was extended to outgoing Board Member Sybille Haeussler, a founding member of the BVRC, who stepped down from her position as board member in 2015. Haeussler was acknowledged at the AGM for her outstanding dedication to the centre, as well as her steadfast contribution over the years as a researcher and advocate for sustainable management of natural resources in the Bulkley Valley.

The Bulkley Valley Research Centre is a Smithers-based not-for-profit that aims to improve knowledge of natural resource sustainability by facilitating credible research projects across British Columbia. For more information, please visit http://www.bvcentre.ca or contact the centre at (250) 847-2827.

Click here to learn more about the BVRC awards.