Conservation of Earth’s biodiversity is embedded in Indigenous fire stewardship 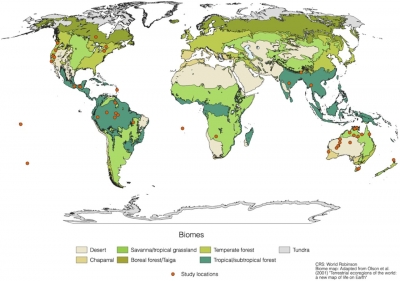 Conservation of Earth’s biodiversity is embedded in Indigenous fire stewardship by Kira Hoffman et al. > Proceedings of the National Academy of Sciences of the United States of America.

Increasingly, severe wildfires have led to declines in biodiversity across all of Earth’s vegetated biomes [D. B. McWethy et al., Nat. Sustain. 2, 797–804 (2019)]. Unfortunately, the displacement of Indigenous peoples and place-based societies that rely on and routinely practice fire stewardship has resulted in significant declines in biodiversity and the functional roles of people in shaping pyrodiverse systems [R. Bliege Bird et al., Proc. Natl. Acad. Sci. U.S.A. 117, 12904–12914 (2020)]. With the aim of assessing the impacts of Indigenous fire stewardship on biodiversity and species function across Earth’s major terrestrial biomes, we conducted a review of relevant primary data papers published from 1900 to present. We examined how the frequency, seasonality, and severity of human-ignited fires can improve or reduce reported metrics of biodiversity and habitat heterogeneity as well as changes to species composition across a range of taxa and spatial and temporal scales. A total of 79% of applicable studies reported increases in biodiversity as a result of fire stewardship, and 63% concluded that habitat heterogeneity was increased by the use of fire. All studies reported that fire stewardship occurred outside of the window of uncontrollable fire activity, and plants (woody and nonwoody vegetation) were the most intensively studied life forms. Three studies reported declines in biodiversity associated with increases in the use of high-severity fire as a result of the disruption of Indigenous-controlled fire regimes with the onset of colonization. Supporting Indigenous-led fire stewardship can assist with reviving important cultural practices while protecting human communities from increasingly severe wildfires, enhancing biodiversity, and increasing ecosystem heterogeneity.