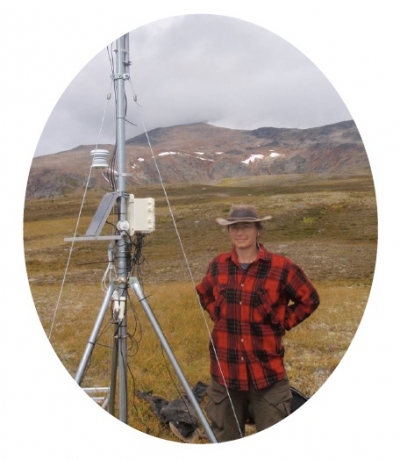 Erica Lilles is a long-time member of the BVRC.  She joined the BVRC in 2007 and since this time, Erica has worked on a wide range of projects at the Centre, as both project manager and researcher.

Erica is passionate about the outdoors and can barely remember a time when she wasn’t interested in the environment and forest ecosystems in particular.     As an undergraduate at Dartmouth, Erica interned at the school's forest dynamics lab in New Hampshire. It was this experience that fully ignited her growing interest in forest science.

After completing her undergraduate degree, Erica sought fieldwork in temperate and boreal forest ecology. This work took her into forests across the US and Canada, from Alaska and Washington to northwest British Columbia.  Her interest in soil-plant integration and her passion for native plant restoration eventually led her to the University of Alberta where she completed an M.Sc. degree in Land Reclamation.

While she hails from the Seattle area, Erica has family ties to BC and in 2004 after graduating, she found herself yearning for the Canadian west. "I was wanting to try living in a small Canadian town that was close to nature. I spent my summer vacations in Tofino growing up so I was enamored with BC and its forests from a young age," says Erica. Today Smithers is very much home for Erica, her husband Eerik, and their two young daughters Wynter and Bergen.

Erica's research interests include forest understory plant ecology, tree competition and facilitation, soil-plant interactions and non-timber forest products development and management.  With the official title of Soil and Vegetation Specialist at the BVRC, Erica has honed her expertise on tree species growth rates across soil resource gradients and has worked on a variety of projects with the forest dynamics group, led by Dave Coates.

As a young scientist, Erica believes the BVRC has provided her with many important opportunities to collaborate with other natural resource researchers and professionals. There is no doubt that Erica loves data, but when asked what she appreciates most about the BVRC, she’s quick to talk about relationships. “The best thing about the Centre is the people, including those who created the BVRC and those who are involved now,” says Erica.

Erica recently accepted a research position with the Ministry of Forests, Lands and Natural Resource Operations (MoFLNRO) as a Natural Resource Management Researcher. In this new role, Erica will work as a generalist researcher covering some aspects of soils, silviculture, ecology and climate change. It is clear that Erica is excited about the possibilities ahead: “I expect to do many multi-disciplinary projects in order to involve all four fields.”

Erica has been an extremely valuable member of the BVRC's research team. We wish her the best as she embarks on her new role within government. While we will miss her around the office, she remains a BVRC member and we look forward to seeing her at future BVRC events.