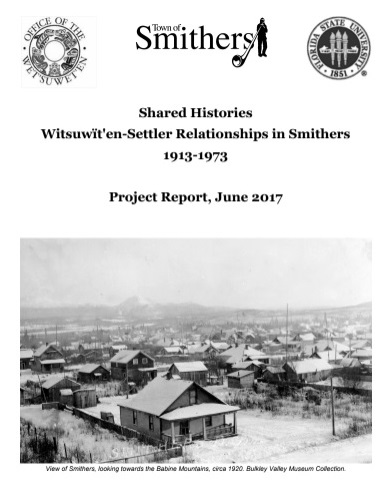 The Shared Histories project examines the history of relationships between Witsuwit'en and settlers in Smithers. While it is widely recognized that Smithers is on Witsuwit'en territory, the experiences of the Witsuwit'en in Smithers are not well known. While Witsuwit'en people have always been living in Smithers, making key contributions to the development of the Bulkley Valley, they have struggled with marginalization and discrimination. The Shared Histories project was initiated as a research collaboration between the Town of Smithers, the Office of the Wet'suwet'en, and a university-based research team to examine this history.

The research team, led by Dr. Tyler McCreary, has completed the process of collecting oral histories and archival records for the project. They are currently preparing a book for publication with Creekstone Press. As it is important to ensure that the book accurately reflects local history, the research team asked a group of informed locals from both the Witsuwit'en and settler communities to provide feedback on the draft chapters. The Bulkley Valley Research Centre partnered with the research team to help facilitate this process.

The primary aim of the project is to help build understanding of our shared history in the Bulkley Valley. McCreary explains that the project was "inspired by conversations that are occurring across the province and indeed the country about how to address the difficult legacies we inherit and build better relationships between the descendants of the original peoples and settlers on this land." He points out that the dialogues around residential schools in particular have showcased the importance of recognizing the trauma of that experience to advancing reconciliation. The research team hopes by sharing the history of Witsuwit'en in Smithers, they can help build both an understanding of the contributions and struggles of Witsuwit'en in our community. Everyone involved in the Shared Histories project hopes that through recognizing history, people can learn from it and ultimately build a fairer and more just future.

While the aim of the Shared Histories project was to build a broader understanding in the community writ large, the research team notes that a secondary outcome was to build relationships through the project itself. The research involved many people and institutions representing both Witsuwit'en and settler communities. Often there has been tension between these communities, and through dialogues around our shared histories, people have begun to develop stronger individual and institutional relationships. "I certainly feel closer to many of the elders from whom I have learned as a product of the research," McCreary says.

The research team encourages everyone in the community to read the interim project report, as well as share and discuss it with others. Click here to access a PDF version of the report, which was published in June 2017. Community members can also find hard copies of the report at the Bulkley Valley Museum and Smithers Public Library. McCreary intends for people to use the report to start broader conversations about the different experiences that residents have had in Smithers, and even begin to rethink who we are as residents of this town and territory.

Keep an eye out for news of the upcoming book publication and launch. In the meantime, if anyone has further questions or would like to contact a member of the Shared Histories project team, send an email to smitherssharedhistories@gmail.com.